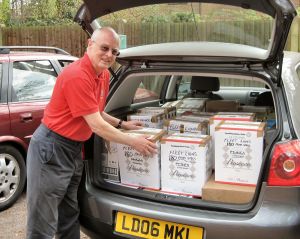 SpecTrek is an activity that involves the collection of used/unwanted spectacles for recycling. They are boxed up and passed to Chichester Lions Club for initial sorting and onward despatch to Medico France in Le Havre who have the necessary equipment to clean and grade the spectacles for sending on to Third World Countries. Many of these spectacles are given to patients treated at Eye-Camps in Africa, India and Eastern Europe, which are often sponsored by Lions Clubs.

Fleet Lions Club has participated in SpecTrek for 36 years and normally sponsors an Eye-Camp each Lion Year. To participate, we collect used/unwanted spectacles from Lions-labelled collecting bins we have placed in local Opticians and from individual members of the public who pass them on to us. Currently we collect from the following Opticians:

The value of these spectacles to those people with impaired sight in Third World Countries cannot be over-emphasised, and participating in SpecTrek must be counted as one of the most worthwhile jobs we undertake.

With spectacles collected from neighbouring Lions clubs, Lions collected a total of over 120,000 pairs in the year to April 2018.  What a difference that will make to education in the Third World.

This was the 36th year of running SpecTrek and the grand total of spectacles collected over that period of time now stands at over 3,000,000 from Lions Clubs in the south of England.

Thanks to everyone who took the trouble to donate their used specs and to the opticians who collected them on our behalf.

The history of Lions SpecTrek

In the early years the specs, collected from Lions Clubs throughout District 105D, were taken to Weymouth Lions who moved them on to the Missionary Optical Society who were based in Cornwall.  The Society then graded and packed them before dispatch to Africa and Asia.

Later, Weymouth lost the services of their "sorter", due to failing eyesight, so we then (with the help of Fareham Lions) took all the specs to a storage site (largely made up of old shipping containers) near Eastleigh.  The provider of the store then passed them on to the Society.

A few years back the owner of the Eastleigh store went out of business and very rapidly, we had to find somewhere else for our, by then, 50,000 plus pairs of specs. Also, by this time the Missionary Optical Society was no longer in the business.

Chichester Lions had been running a nationwide collection using Parcel Force for some time, and we contacted them.  Brilliantly, they were able to help, although our specs added a lot to their steady annual flow. In the first year we took all our collection to various sites around Chichester.  Thereafter, we have passed the specs onto Chichester Lions via Midhurst Lions who help Chichester with storing and packing.  Until a few years ago we held on to half the collection in Petersfield and passed these on over the following year as Midhurst's space became available.  Today, having lost our store, we have to take the whole of a Spectrek run to Midhurst.  Every year we pray that they do not run out of storage space.

So what happens to the specs after Midhurst?  The Midhurst Lions have a regular sorting and packing session (weekly, I believe).  They go through the specs discarding the junk, breakages etc. Where gold is present in the frames, they arrange for its extraction to raise money for sight-related charities both at home and abroad. Midhurst also have a regular cases and sunglasses stall at the local community centre. The repacked specs are passed on to Chichester Lions.

Chichester Lions store the packages and arrange their shipment across the channel to Le Havre to the charity "Medico France". This charity, which was set up by Lions Clubs in France, then grades the specs and prepares them for the last leg of their journey to sight projects in Africa and Asia. There is a good relationship between Lions in France and Chichester and they visit several times a year to pick up sorted specs for delivery to Le Havre. Some are also taken free of charge by "Fraser Freight", a haulage company based in Portsmouth. Although no grading takes place in Chichester, some of the rough sorted specs are sent to a prison just outside Durham where prisoners grade them with equipment donated to them and then these specs are sent on to France in the normal way. For further details of the process, please log onto www.chilions.org.uk

Any money collected en-route or donations received from other clubs, is donated to the Lions Sight Savers Trust for Comprehensive Eye Services.

SpecTrek is an exhausting day which is itself the culmination of a year's work by Lions Clubs all over central southern England.  But when one looks at the outcome it is one of the most rewarding things we do.  In these days of green issues the Lions spectacle collection project is more than recycling; it is reuse of a costly asset.   We have collected over three million pairs of specs over the last 36 years; how much would they cost at today's prices? Ł50 million?  Ł100 million?  And, most important of all, the collection brings hope to many families in the developing world who have been blighted by loss of sight.

PRIDE IN THE COMMUNITY